Showing posts from May, 2011
Show all

I struggled with this week's Friday Freebie, because to be honest, I just didn't want to let this cat "out of the bag." It's a web-based video creation site called Animoto. People that have seen my finished products from Animoto think I'm some kind of video genius. But the truth is, it's really, really simple to do.

Then you create a new project, pick a theme, upload pictures, select music, add text, and sit back and let the Animoto magic happen. After the video is rendered (which may take some time, so you can exit the site) you'll get an email directing you to the finished product. Here's an example I did:

The Power of PDF's

Most of you reading this have, at one time or another, either opened or created a pdf file. PDF stands for "portable document format" and it's a convenient way to save files in a universal format for others to open. Creating a pdf is often as simple as clicking "Save As" in a program and chosing the pdf format.

So what does it do? With it, you can create pdf forms that can be filled out by the end user (with the free reader) and emailed back to you. You can take a multiple page pdf and "split" it into multiple files. And, to me the coolest feature is the ability to create pdf portfolios.

A pdf portfolio is a pdf fil…
3 comments
Read more Today, my son was wandering around the house looking for something. After a few minutes of watching him go from room to room, my wife asked him what he was looking for. He said he was looking for a button for his shorts. My wife said there were no extra buttons lying around the house, to which he replied he had found one before and even sewed it on himself.
Surprised, I asked him where he had learned to sew on a button. I was expecting a heartfelt "from Gandma" or an educated "in  home economics." Instead, he answered quickly and matter-of-factly - "from YouTube."
I should have known. I heard somewhere that when older people  use the internet to learn how to do something, they "Google" it. Today's digital natives are increasingly going to YouTube to learn. And to be honest, there's some great stuff out there!
The teacher in me wanted to "test the waters" so I did some YouTube searching myself. I typed in the following searches in …
1 comment
Read more

May 13, 2011
Today's Friday Freebie isn't one piece of free software, it's a multitude of free stuff - all through Google! Most people know about the great search features of Google, but more people need to learn about the wonderful tools you get when you sign up for a Google account.

Gmail gives you free email that's robust and easy to use. GoogleDocs allows you to create and collaborate online on documents, spreadsheets, presentations, forms, and more! Google's PicasaWeb is a great online tool for sharing photos. And my new best friend is GoogleSites that allows you to create fantastic looking websites - all for FREE. And those are just four of many, many more programs you can access with a Google account.

I recently re-created the website for my Knights of Columbus Council. Using GoogleSites, GoogleDocs, GoogleFeedBurner, and Picasa, I think I've made a remarkably good-looking site with lots of productive value. Don't believe me? Just visit it http://sites.google.com/…
Post a Comment
Read more

Recently students in our Junior English classes were given an assignment to come up with a memorable quote. They were given examples to look at and dissect, and then they were set off to come up with words of wisdom of their own.

They tweaked and re-tweaked the quotes until they were happy with them and then wrote the quotes on strips of paper. Some added artwork to their quote strips and these colorful strips adorned our hallway for several weeks.  Well, I wanted to create a keepsake of these quotes that could be shared with others.

So, I created a Keynote presentation using the quotes. (For you non-Mac users, Keynote is Mac's presentation software.) I used a cool transition called "Anagram" between the slides and then exported it as movie. I dropped it into iMovie, added music, and sent it to YouTube. Viola!

So, here is the world premiere of "Words of Wisdom from Cole Students". Enjoy! 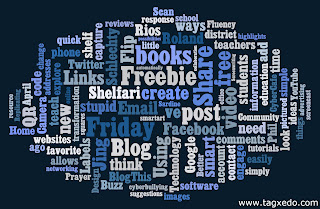 Chances are you've heard of a website called Wordle. It's a nifty site that allows you to enter text and, after analyzing the text for repeated words, Wordle creates a "word cloud" picture. You can tweak your cloud by choosing from a variety of color schemes. I love the site, but it is not easy to save your word clouds and printing can be difficult. There is also not a lot of variety in the shapes of your word clouds.

Well, there's a new word cloud site in town and it rocks! It's Tagxedo! (Pronounced like "tuxedo" but with "tag" at the beginning.) With Tagxedo, you can enter text like Wordle, but you can also enter a web address, RSS feed, and more. (The word cloud above was created when I entered the web address for this blog!)

May 05, 2011
Recently, during a day-long training session with Nancy Rindone from The Schlechty Center, I heard some prophetic wisdom from Phil Schlechty who said that, "every now and then we need to be stupid in order to act smart." Think about that - we need to think stupid in order to act smart. What Phil was referring to is educators' inability to think "outside the box." We tend to think only about the ways things have "always been done" and we're very quick to shoot down new and exciting ideas. In order to meet the needs of our new learners, we need to allow ourselves to think about crazy things and to reach beyond our comfort level. Only then can we start to explore new ways to reach and teach our students, and come up with new ways to reach and teach each other.

Now of course, Phil is not asking us to just be stupid and irresponsible. It's his clever way of saying we need to let go of anything holding us back - to look at things through different l…
Post a Comment
Read more

If you love books, then you'll love today's Friday Freebie! It's Shelfari (http://www.shelfari.com/) - an online social networking site that allows you to track the books you've read, engage in book discussions with others, and get suggestions for future books - all for FREE
Creating an account is simple, especially if you have an Amazon account because now you can link the two accounts! If you don't have an Amazon account, you can create one directly from Shelfari.
Once in, you add information to your profile (as much or little as you want to share). Then, the fun starts. Search and add books to your virtual shelf! Add your own reviews. Rate your books! Look for new ones to read. You can even change the look and wood grain of your bookshelf. Here's a quick link to what's sitting on my shelf right now. You can even embed your shelf into websites and blogs. (Look in the lower right sidebar of this blog for my embedded shelf.)
I can see some cool uses of this in…
Post a Comment
Read more
More posts